Eclipse is one of the most popular IDE amongst java developers, It has a very active community and many open source plugins + developer tools built around the ecosystem. the coolest features of Eclipse is its code Automatic build that retains time as the developers never have to see in the API documents. Other features include Built-in debugger, Error checking, Source code generation, Code refactoring, Help window as toy type. Eclipse is an open source, free IDE like NetBeans, so the users can work on both the web and the desktop IDEs by building their own plug-ins to modify Eclipse to meet their particular needs. 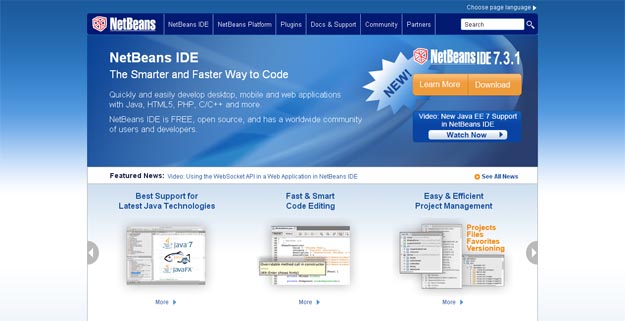 It consists of an open-source IDE and an application platform that enable developers to rapidly create web, enterprise, desktop, and mobile applications. Java is the main platform and it also supports JavaFX, PHP, JavaScriptx, Ruby +Ruby on Rails, Groovy and Grails and C/C++.

JGRASP is a lightweight development environment, created specifically to provide automatic generation of software visualizations to improve the comprehensibility of software. jGRASP is implemented in Java, and runs on all platforms with a Java Virtual Machine (Java version 1.5 or higher). jGRASP produces Control Structure Diagrams (CSDs) for Java, C, C++, Objective-C, Python, Ada, and VHDL; Complexity Profile Graphs (CPGs) for Java and Ada; UML class diagrams for Java; and has dynamic object viewers and a viewer canvas that work in conjunction with an integrated debugger and workbench for Java.

JBuilder® is one of the most complete and powerful Java IDE’s available with support for the leading commercial and open source Java EE 5 application servers. JBuilder’s code profiling and performance tuning tools, which include the ability to profile Web applications, enable Java developers to deliver high performing, scalable applications. With the built-in audits and metrics, you can measure the overall quality of the object design, the complexity and cohesion between objects, the extent of test coverage, and many other factors to help pinpoint potential maintenance, quality and performance issues.

DrJava is a lightweight development environment for writing Java programs. It is designed primarily for students, providing an intuitive interface and the ability to interactively evaluate Java code. It also includes powerful features for more advanced users. DrJava is available for free under the BSD License, and it is under active development by the JavaPLT group at Rice University.

SnapCode is an IDE and RAD tool for education, entertainment and the enterprise. For education, there is a visual code editor for building Java applications with simple drag and drop. There are Studio/Actor classes with methods to move, turn, resize and more to quickly build animations and stories. For the enterprise, there is a traditional JavaText code editor with modern IDE features, a UI builder, a page designer, a report builder, a data table builder, a query builder, automatic forms and reports generation, a browser runtime player, a client/server cloud back-end and more.

JCreator is the development tool for every programmer that likes to do what he does best: programming. It is faster, more efficient and more reliable than other Java IDE’s. Therefore it is the perfect tool for programmers of every level, from learning programmer to Java-specialist. JCreator provides the user with a wide range of functionality such as : Project management, project templates, code-completion, debugger interface, editor with syntax highlighting, wizards and a fully customizable user interface.

BlueJ is a development environment that allows you to develop Java programs quickly and easily. BlueJ has a deliberately smaller and simpler interface than professional environments like NetBeans or Eclipse. This allows beginners to get started more quickly, and without being overwhelmed. BlueJ is deliberately designed with good pedagogy in mind. There is a popular textbook designed for teaching introductory university/college courses with BlueJ, and a site full of teaching resources.