Lotus is Open Source Framework, which strives for simplicity, fewer DSLs, minimal conventions, more objects, zero monkey-patching and the separation of concerns between MVC layers. It suggests best practices, but it leaves all the freedom to you, the developer, to build your own architecture, with your own objects. Lotus is made of standalone frameworks (controllers, views, etc.) and each one is shipped as an independent gem to emphasize the separation of concerns. 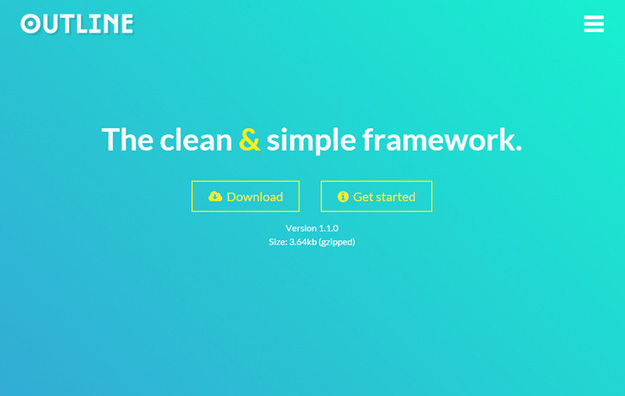 Outline is a simple CSS starter responsive boilerplate for any new web project, created by Matt Harris. It’s a modular, mobile-first framework which includes todays best practices for responsive design and core components I use on every project. Outline is designed to be a starting point. A solid foundation for your project, leaving the creativity up to you.

Tabris.js is a mobile framework that lets you develop native iOS and Android apps from a single code base written entirely in JavaScript. When HTML5 doesn’t cut it – Tabris.js will give you an easy path to native apps while building upon your existing JavaScript knowledge. It doesn’t use WebViews for rendering UI, and instead creates native widgets on the mobile platform via a JavaScript-to-native bridge.

Pyramid is a very general open source Python web framework. As a framework, its primary job is to make it easier for a developer to create an arbitrary web application. The type of application being created isn’t really important; it could be a spreadsheet, a corporate intranet, or a social networking platform. Pyramid is general enough that it can be used in a wide variety of circumstances.

Emastic is a lightweight CSS framework that allows for fluid and fixed columns in the grid. It includes baseline grid typography, personalized page width, and more.

Baseguide is a robust and lightweight Sass-powered CSS framework. It includes all the basic elements—typography, forms, buttons, media, grid and more—in one small package.

Kathamo is a Minimalist CSS Framework for Rapid & Mobile-Friendly Development. Kathamo has a few easy ways to quickly get started, each one appealing to a different skill level and use case.

Markdown UI is a framework that lets you create responsive user interfaces in Markdown. You can write UI’s just once and then translate to Semantic UI 2.0, and soon to Bootstrap 3 and Foundation, plus you can use it for rapid prototyping.

Bootcards is a cards-based UI framework. It is built on top of Bootstrap and uses it’s responsive features. Unlike most other UI frameworks, it includes a dual-pane interface for tablet users. Bootcards includes stylesheets to give your apps a native look, whether that’s on iOS, Android or desktop.

Bottle is a python web framework that’s fast, simple, and lightweight. It supports routing, templates, and utilities, and has no dependencies other than the Python Standard Library.

Rebar is a responsive SASS/Stylus grid framework. It keeps your CSS organized and makes your development more efficient.

Schema is a modular, responsive, front end framework to easily and quickly help you jumpstart your process in building complex interfaces for the web right out the box. Schema comes fully equipped with the capabilities of creating familiar experiences across multiple viewports. From a desktop monitor down to a mobile device, Schema’s 12-column grid provides flexibility. Schema leverages the power of Less. This enables a clean structure of code that is super easy to maintain. Whether you’re trying to put a quick design to a prototype, or if you’re working on a production-ready application, Schema provides the foundation and components to easily design any responsive web project.